7 EASY STEPS ON HOW TO LEARN TO CODE WITH PYTHON

The purpose of its development is to simplify the learning process of a programming language; also, to display to beginners the concepts of programming easily.

Python can be used on a server to create web applications, with the aid of python, you can write basic programs and scripts, creating solutions for complex and large-scale enterprises.

There are different software applications used in writing Python codes, they can also be referred to as Python IDEs or code Editors. These softwares make it easy and simplified for your python code. With the aid of these IDEs and editors, your python codes can be created.

Visual studio code is one of the most used code editors today, it can be used to write your code in Python. See the diagram of  Visual Studio Code below:

In order to practice, you can download Visual Studio Code following these simple steps

Before go into the 7 easy steps on how to learn to code with python, there are some basic concepts you need to understand.

The Python syntax is concise, simplified, clear and it is focused on its readability. Readability is one of the many features of python which makes it attractive. There are several components of the python syntax which are listed below:

Comments: Comments are used to describe the codes in order for developers to understand the function of the code or the reason the code is written in a specific way. Comments can be described as pieces of text that are embedded in your codes which are constantly ignored by the Python interpreter as it executes the code.

Inline comments can also be added to your code; a comment in a single line can be combined with a python expression, provided that the comment occupies the final part of the same line.

Variables: In Python, variables are names given to a particular subject, these variables serve as a reference to the memory address as to which the object is stored. It is worth noting that you can access the object using the variable name once a variable is assigned to an object. You can define your variables using the syntax below:

Sometimes programmers use short variable names, such as x and y. These are perfectly suitable names in the context of math, algebra, and so on. In other contexts, you should avoid single-character names and use something more descriptive. That way, other developers can make an educated guess of what your variables hold.

Pro tip: Think of others, as well as your future self, when writing your programs.

Examples of valid and invalid variables names in Python:

Keywords: Python has a set of unique words that are part of its syntax; these words are known as Keywords. Each of these plays a vital role in Python Syntax, they are reserved words that have specific meanings. They should not be used for any other purpose but those specific purposes, these variables should not be used as variable names in your code.

Here is a list of the Python keywords.  Enter any keyword to get more help.

These statements control the execution of a group of statements based on the truth value of an expression, this simply means, there are sometimes you need to run or not run a given code block depending on the several conditions which needs to be met. The creation of a conditional statement in python is made with the “if” keyword and the following general syntax:

# Run if all expressions are false

Loops are structures that let you repeat python over and over. These can also be referred to as formation or arrangements that permit a user to repeat codes over time. Loops in programming come into use when we need to repeatedly execute a block of statements.

# Run if all expressions are false

Lists: are data structures in Python used to store ordered groups of data; this simply means that for a data to be stored in order, the list factor is very important. It can also be described as an ordered collection of items which makes it easy for a set of data. List values are placed in between square brackets[ ], separated b y commas. It is worth noting that the values in a list do not need to be unique in the sense that the same value can be repeated.

Note: Empty lists do not contain any atom of value around the square brackets.

Functions: A function can be described as a collection of statements that performs certain tasks and gives back the result to the caller, it is also possible for a function to perform some specific task without returning anything to the caller. A function simply performs the activity of creating an ability for a user to reuse the same codes which saves the excessive use of memory, and also creates the ability for the codes to be readable. While making use of Python, def keyword is used in creating functions.

Strings: Strings is described as a specific syntax which can be any length or any form of character such as symbols, whitespace, letters, numbers etc. Strings has the ability to automatically create, rearrange, reassemble, disassemble, and reassign blocks of text. Also,have this in mind that a string can also be referred to as a list of characters, unlike any other list, every character in a string has an Index.

Dictionary : This can be defined as a book or electronic resource that lists the words of a language (typically in alphabetical order) and gives their meaning, or gives the equivalent words in a different language, often also providing information about pronunciation, origin, and usage.

In Python, a dictionary is described as an unordered set of keys that provides us with a technique of mapping out pieces of data to one another in order to easily get the values associated with each other.

Value in a Python dictionary can be accessed with the process of placing the key within square brackets which are relatively close to the dictionary, with the help of the assignment operator which is (=). To access a value key with a key that does not exist will cause a definite error called ‘KeyError’.

Files: One of the uses of a file system in computers is that it helps to store and retrieve data, each file is an individual container of related information. Saving, downloading, installing any kind of files on your computer has automatically created a file on your systems, the Python program in which you edit in a learning environment is described as a file. A python file can be created when a file is opened with the ‘open()’ function. The files can be associated with other nature of file using the ‘with’ and ‘as’ keywords

Indentations: Indentations are used to highlight blocks of code, for indentation in Python, whitespace is used. It is worthy to note that all statements to the right with the same distance belong to the same blocks of code.

print(‘Logging on to imagine stem academy…’)

Having gotten the knowledge of these syntaxes, let’s take a look at the 7 Easy Steps on how to learn to Code with Python:

7 Easy Steps on how to learn to Code with Python

We shall be using the PyCharm editor for our illustrations 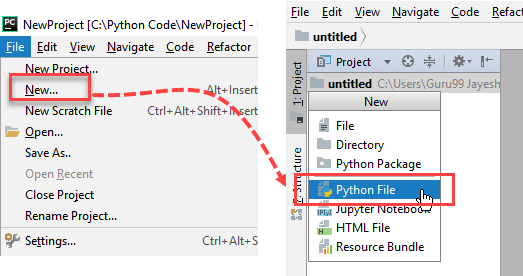 Indentations: Indentations are used to highlight blocks of code, for indentation in Python, whitespace is used. It is worth noting that all statements to the right with the same distance belong to the same blocks of code.

Bravo!!!, you have successfully learned how to write your first line of code with Python. These 7 simple steps on how to learn to code with Python will help you get started;

if you do not have PyCharm, you can make use of any IDE or editor as well.

Looking to start your journey as a programmer join other kids at the Academy today.

Click the button below to start with a FREE online Coding session with an instructor to guide you.